So once upon a time I dated a guy with lots of tattoos who worshiped his mom.

That has nothing to do with the story.

Once upon a time, my official job title was “Director of Business Development.”

As Director of Business Development, I flaunted my ass all over Philadelphia, flashing biz cards left and right with that ridiculously long title printed all over ’em, thinkin’ I was real hot shit.

So do me a favor. For those of you who have never been in marketing or sales, tell me something: Would you have any fucking idea what I did on a daily basis?

Clearly, you were developing business, Ash.

But in normal, everyday terms, what did I do for a living?

What I did for a living rhymed with male schlepp. Peppermint pep. Yeah-baby-let-me-see-your-one-two step.

That’s right, ladies and gentlemen of the jury.

Now time out. Put that story in your pocket for a minute. We’re moving on.

What do all of the following terms + phrases have in common?–

Did you happen to guess…………. AMBIGUOUS BULLSHIT?

Before you get your cute little polka dotted panties in a bunch, that’s not to say that I think any of those things ARE bullshit. (Life coaches – I love you – but pay attention.)

In fact, the things I listed aren’t bullshit at all. (Except maybe the whole “it’s not you it’s me” thing. I’ve used this tons of times and–trust me–it’s ALWAYS them.)

The problem, however, is that they all SOUND like bullshit.

So, how do these two ridiculous stories tie together?

You’re probably onto me already. Keep the change, you filthy animal.

Sorry. I must be channeling my inner television goddess thanks to my upcoming One Night Stand with Stacey Parks, my favorite TV + film producer.

They relate because today we’re talking about abstract concepts in business–and how they’re preventing you from making money.

Too often, I see service providers using all sorts of fancy terminology to describe their services and the benefits of those services–possibly in an effort to seem expert, possibly because they’re too wrapped up in their own heads, and possibly because they don’t know better. But reasoning aside, fancy terminology can sometimes have the opposite effect of what you’re hoping for, resulting in less sales rather than more.

In other, more eloquent words: At the end of the day, you’ll be lucky if you have a pot to piss in.

Because while you’re busy scratching your ass trying to appear capable, your prospective clients and customers are sitting there scratching their asses wondering what the fuck you’re talking about.

And guess what? They aren’t going to wonder long.–

If they don’t understand what, exactly, you’re selling them, then guess what? You ain’t gonna sell ’em.

It’d be like me trying to sell you a large box of injection-molded plastic containing precision-made glass, fluorescent chemical coatings, and silicon chips for $599.

Your face would twist up in some kind of unattractive contortion like you just ate a Sour Patch Kid, and you’d be all, “Hell no. Idiot.”

And you’d be all, “I don’t even know what any of that stuff is.”

And I’d be all, “I think the commoners call it something like a TV.”

And I’d be all, “Because I was trying to make it sound impressive and worth $599!”

So what’s a biz person to do?

Sometimes, you may need to use fancy industry jargon, but if that’s the case, do everyone a favor and break it on down in terms that everyone understands. Remember: If I don’t understand it, I don’t want to buy it.

If you’re a photographer, for example, don’t try and sell me on the fact that you use some hoighty toighty lens . Sell me on what the lens does in a way that I can relate to, and therefore, care about. (And care about enough to spend my money on.)

It’s about taking abstract concepts–defined as such in the mind of your MARKET, not in YOURS–and making them more concrete. Making them tangible. Making them relatable.

Which means you need to spend some a good amount of time understanding who your market is, dawg. Not how fucking old they are, but who they REALLY ARE. There’s a difference.–

To hammer the point home, check out these two ads I saw in a magazine I was reading this morning: 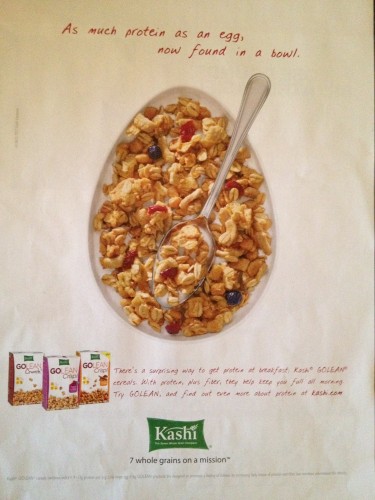 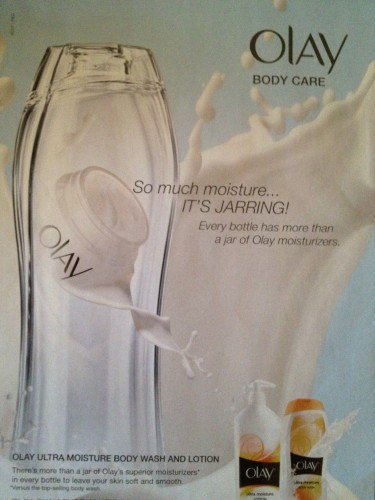 In the first ad for Kashi, their ad people are some clever bastards.

They could have just said: “With a whopping 9-13 grams of protein per bowl!” (Which is what it really is according to their nutrition facts.)

The problem with that?

Nobody gives a shit. Because you and I can’t tangibly envision 9-13 grams of protein. It isn’t concrete for us. It’s too abstract. So therefore, it becomes a moot selling point.

However, position it the way Kashi did, and tell me that there’s as much protein in an egg, now found in a bowl?

THAT’S something I can immediately grasp. That’s something I’m into, because everybody knows that eggs have lots of protein. I can picture an egg. And maybe I’m sick of eating eggs. So when you tell me there’s as much protein in this bowl of Kashi as there is in an egg, I make the connection in my mind and it DOES become a very legitimate selling point.

Then on the other hand, we’ve got good old Olay.

Olay Body Care: Every bottle has more than a jar of Olay moisturizers.

They could have just said: “Contains twice the amount of moisturizer than other leading body washes.” (Which is also true–taken from their site.)

But, again, the problem with that is that it isn’t so concrete for me. Well how much moisturizer is in other leading body washes? Is twice the amount a substantial difference, or is it marginal? It’s not a good point of comparison.

So you see my point.

This was a long ass blog post, but the concepts are all related here – less tangible, less sales. More tangible, more sales.

I guess I could have just said that from the beginning. But then I wouldn’t have been able to mix in all of those random TV references, and clearly the world would be worse off.

So think of my long-windiness as a good deed of sorts.

And do me a favor: The next time some guy or girl tells you that it’s not you, it’s them?

And then tell ’em you’d be way more likely to buy their bag of horseshit…if they could kindly put that in more concrete terms for you.