“If you were a pizza delivery man, how would you benefit from scissors?”

“Why is a tennis ball fuzzy?”

“What is your least favorite thing about humanity?”

“How does the internet work?”

Can you believe this? There are innocent people getting clobbered with these kinds of interview questions in dimly lit corporate offices AS WE SPEAK.

(Except actually just kidding, because I happen to think those questions are excellent. You really want to weed out those drug lords, you know?)

I wish any interview I’d ever been on were half that interesting. The only one I remember with any clarity was with a man named Bob (of course his name was Bob), who flat out asked me:

So, are you an asshole?

To which naturally I responded, “yes.” It was, after all, a job in advertising.

Bob and I got to be pals over the years—mostly because he would haphazardly show up in Philly unannounced, hop in the car for a ‘ride along’ (code for show me what you’re made of, sucker), and spend the day trying to maintain a professional front while being forced to listen to reggaeton songs referencing a certain delight known as the culo. I figured it was only fair—this way, we could both feel delightfully awkward.

One time we left a meeting, and Bob pulled me aside and said something I didn’t like.

You gotta be less, Ash. You’re over the top. Don’t be so…personal. (I think he meant to say personable, but we’ll let that one go, Bob.)

Five minutes later, the client called to confirm not just one contract, but five.

You see, Bob, the reason I get every contract signed on first meeting is because it’s personal. Not in spite of the fact.

Every single person sitting on the other side of a transaction is hoping. Hoping to feel understood. Hoping to feel seen. Hoping to feel like somebody actually gets them. And it’s your responsibility as a business owner, as a marketer, as a sales person, as anyone asking another person for money in exchange for something, to facilitate the damn connection.

The problem with most marketing is that: It’s marketing.

In an online world where people can’t be sold to, but choose to buy, modern marketing has evolved into a new form of its own. That new form goes by a new name: Danny. Alice. Sarah. Julie. John. Susan. Reese. Lily. Or yours.

They’re called humans.  And they aren’t just your buyers—they’re your business.

Back in the day it was a lot easier. You could sit in front of another person and get a read on who they were and what they needed. Nowadays it isn’t so easy. In a land of websites and words, mobile devices and iMessage, you’re almost never standing in front of the people you’re selling to. So how do you get the read? How do you position your offer accordingly? And how do you get the sale, when you can’t sell?

And my answer is this: We might be working with a different medium, but the same golden rule that has always applied, still does.

Listen first. And then listen some more. And just when you’re about to speak up? Shut up. And listen harder.

Here’s my secret for listening meaningfully online—and finding a way to make the damn connection.

Add different tags to your notebook so you can easily sort different sub markets.

That way, when I’m writing anything for them, I first read what they’ve written to me. I read everything that’s written to me. I know who you are, and what hangs heavy from your heart at 2 o’clock in the morning. I read about your life, your love, your losses, your “if onlys” and your “maybe somedays.” I read about how your dad was just diagnosed with Stage 4 pancreatic cancer, “and you’ve given god a big fuck you this week.” I know about how you’re auditioning to sing in Kobe, Japan, and that you wore the charm our company sent you. (With your son’s photo in it because, as you say, both symbolize possibility.) I know your friend loaned you money this month,  and you feel guilty because you “should just suck it up and go back to corporate hell.” And I know you aren’t sure about much of anything, these days. 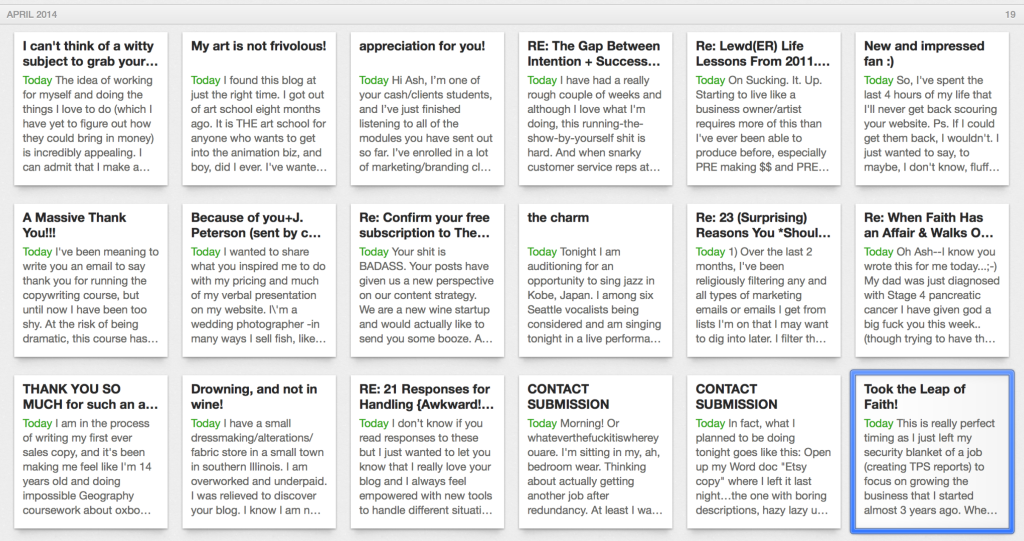 But the minute we forget that there’s a human using all of them?

Our marketing hasn’t only failed.

Currently on the word shitlist: Turnkey