Seriously, who wants to be the pitbull with the perfume, attacking women and children as they innocently stroll through the Bon-Ton? Certainly not me. And probably not you, either, unless you happen to have a penchant for rose petals and lollipops (which is what all perfume smells like).

But if you think of selling for what it really is—facilitating a mutual exchange of pleasure—then selling becomes less a manipulative, slightly overweight and balding “sales person” task, and more that of a seductress. Because isn’t that what we’re really doing here? We’re getting dolled up with our websites, putting our best face forward, rubbing a red high heel against the bar and then saying out loud, “I see you, darlin’.” Which sort of makes sales sound like prostitution, but I promise it’s much more legitimate.

Sales is about a mutual exchange of pleasure.

The first keyword is mutual, and the second pleasure. When a transaction between a seller and buyer takes place, it isn’t because the seller is greedy and the buyer is stupid. Buyers are not stupid; they know exactly what they’re doing. And what they’re doing is giving you something you want (money) in exchange for something they want (what you sell).

So when you market yourself; when you build a website and develop an email campaign, and when you do anything else that potentially aims to get you attention, you aren’t being the woman with perfume, attacking people as they walk by. Rather, you’re setting up a Sephora, and letting the perfect person come to you.

When you market yourself, you’re merely taking two separate things in this world (a person, and what you sell), and making an introduction. And when you “sell” that person, you’re merely stepping out of the way so they can go home together. When you start to look at sales this way—playing match maker and doing your best to facilitate mutual exchanges of pleasure—it becomes much less of an intimidating, icky, forceful thing, and much more like you’re doing everybody a huge fucking favor. After all, nobody wants to be lonely. (Cue Ricky Martin.) What if you have the very thing that someone, somewhere, has been wishing for all this time?

That said, I get a lot of questions like: Well how do I go from being useful and being buddy buddy, to suddenly asking for their money? In what context does that happen? Do you tell someone up front you’ll be trying to sell them something later? Do you wait and then just spring it on them? (Email, email, email, email, email, email: OH, HERE, BUY MY STUFF!) How do you go about asking for the sale eloquently, but also effectively? And…why is this so scary?

And in order to answer those questions, I’m going to start by posing another one:

Would this cracked-out anxiety exist if you were 100% confident in what you were selling?

Consider for a moment that a lot of the hesitation, the nervousness, the fear, the trepidation around selling doesn’t come from the actual act of asking for money; it comes from worrying that you somehow don’t deserve their money. That you’re somehow cheating them. That you aren’t providing an evenly mutual exchange of pleasure, and that their money is worth more to you, than what you’re selling is worth to them. And that you feel like a fraud.

Before we move any further, can we agree that this is a bunch of lackluster bullshit?

No matter what stage you’re in, where you’re at, what you’re making, and how you’d like to sell it, you’re doing the best that you can.

Who do you think you are, Al Capone? Do you think you’re a crook? A swindler? A pettifogger? (If you didn’t know that word, I highly recommend casually throwing it into conversation at least four times a week. It’s like a sophisticated way to call someone a money-grubbing con artist.)

I assure you; you’re none of these things. So can we take that off the table right now?

And that they want you to make them a sales offer?

That they’re desperately hoping they can give you their money?

They won’t be sorry. They’ll be thrilled. 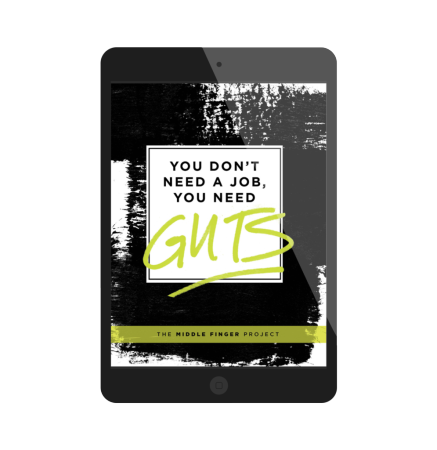 Above excerpt taken from:

You Don’t Need a Job, You Need Guts

For anybody striking it out on their own & feeling like they’re up shit’s creek without a paddle. Or a bottle of vodka. Or maybe even a boat?

Currently on the word shitlist: Guru