If I could scream from the top of Brad Pitt’s rooftop (have you SEEN those Chanel commercials?), you know what I’d yell?

Of course I’d be embarrassed because I sort of have a man voice, but I think Brad would be okay with it. And he wouldn’t mind because it’s a form of philanthropy since, really, the world needs to hear it.

Gone are the days of stiff. Buttoned up. Pretentious. In business, at least. (I can’t speak for your mother-in-law.)

Because now, people have more choices than ever before.

That thing called the world wide web? Made it so now, you aren’t limited to whatever they’re selling down at the Dollar General. It also took things from a monologue, with companies having a one-way conversation with you via manipulation of the media, to a dialogue–where you, now, can talk back. You have a say. And frankly, a lot of companies are scared about what you’re going to say about them. So it’s pushed them to up the ante. (We like this ante upping very much.)

And with this ante upping comes the task of actually GIVING YOU AN ACTUAL REASON TO BUY FROM THEM, AND NOT SOMEBODY ELSE.

Because, as I’ve said many times before – how do you give people a reason to buy from you when you’re selling the exact same thing as everybody else?

You get a fucking personality.

(See how I just interjected that sentence with a big menacing word? That’s because it’s my personality. And I am clearly big and menacing.)

Seeing brands come out of their shell is one of the most delightful things for me, right next to an afternoon Scotch. (I’ve been watching Mad Men recently. It’s rubbing off.)

Every time I come across a company that exudes personality, I’ve been over here like an OCD psychopath, taking screen shots and laughing so loud my neighbors either think I do nothing but watch Comedy Central 24/7, or I’ve got an exceptionally entertaining bird (or man?) outside my window. Little do they know I’m working. *seductively lifts 1960’s ballroom dress to show a little leg* *remembers I’m not actually ON Mad Men*

So I thought I’d be the good little girl on the playground and share.

(Sidenote: If you’re reading this in your email, you’re going to want to display images for this one.) 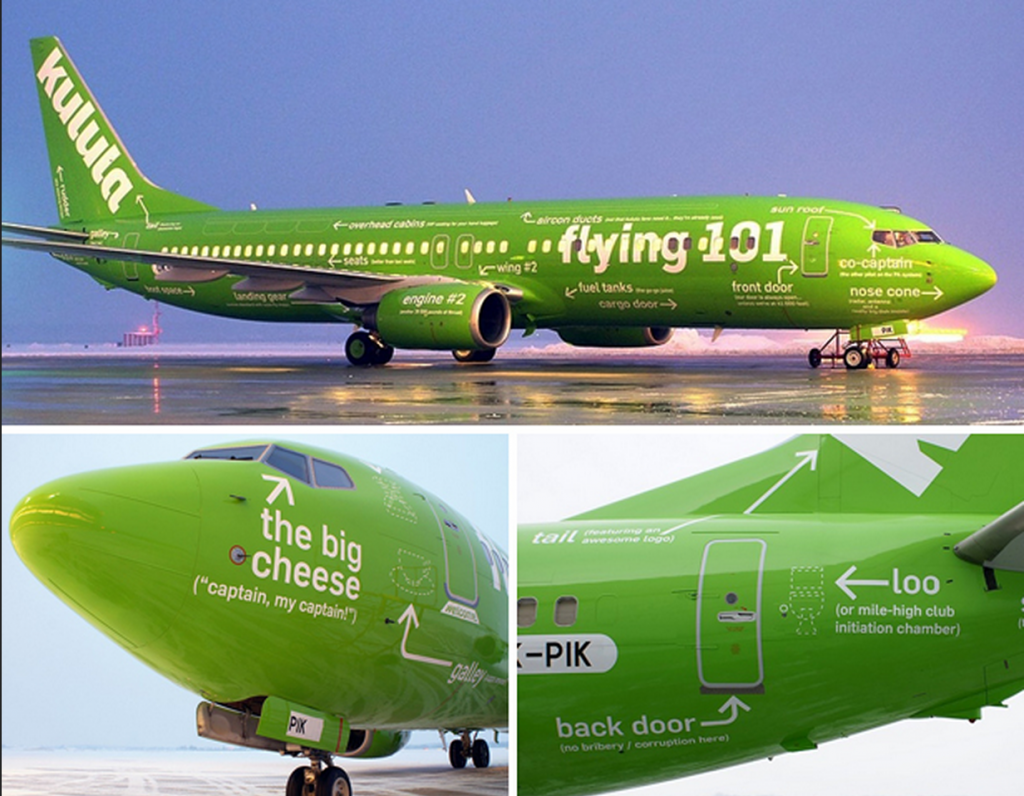 2. Second, they have fun sections on their website that explain their brand – including the painting of their planes. 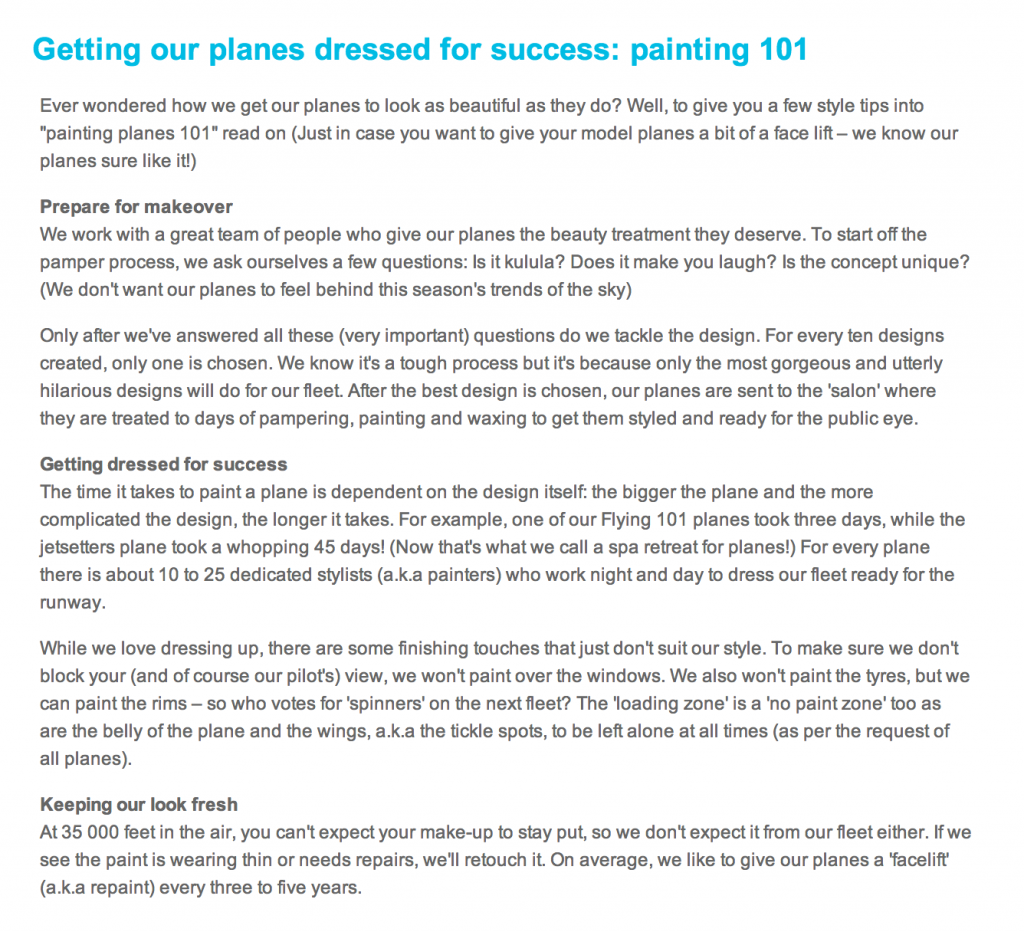 3. They care enough to explain the frustrating aspects of their business to their customers–why things happen, and in layman’s terms. What a breath of fresh air. 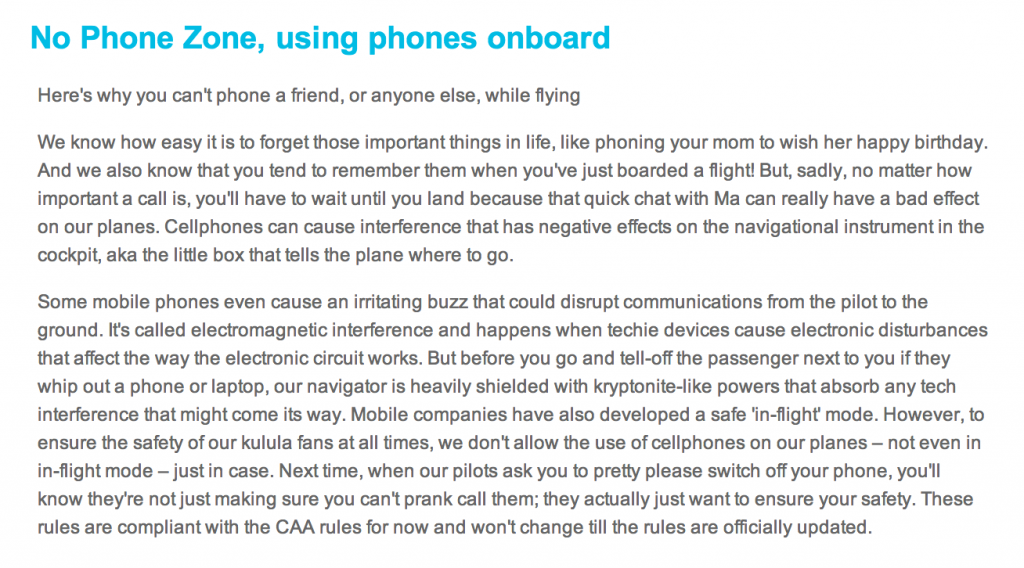 4. They make ads like these. (This was made the weekend South Africa’s president married his fourth wife. Funny.) 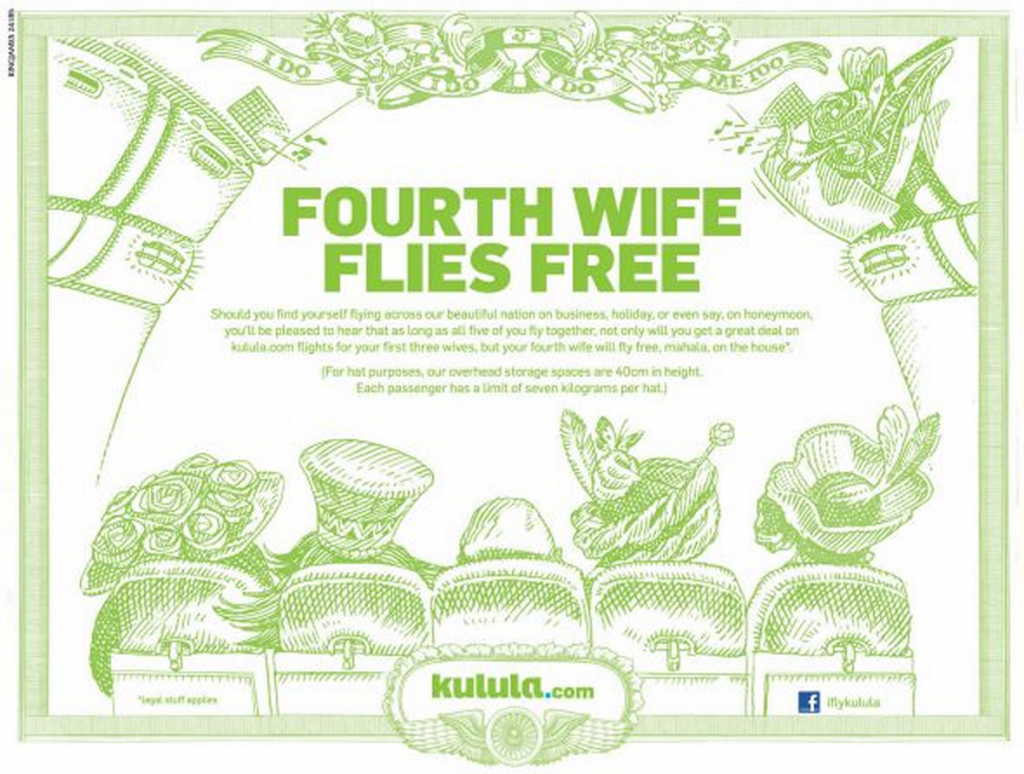 5. Their mission? To help people lighten up. Precisely why I’m featuring them in this post.

6. And last but not least, it’s been rumored that their pilots say hilarious things on the intercom.

And I appreciate a pilot who doesn’t sound like he’s about to keel over mid-flight from misery, boredom or because it’s the 4,568th baby he’s heard cry for 8 hours straight. (Wink.) Some things they’ve been known to say: –

“We’d like to thank you folks for flying with us today. And, the next time you get the insane urge to go blasting through the skies in a pressurized metal tube, we hope you’ll think of Kulula Airways.”

“Ladies and gentlemen, if you wish to smoke, the smoking section on this airplane is on the wing. If you can light ’em, you can smoke ’em.”

After a hard landing: “Ladies and Gentlemen, welcome. Please remain in your seats with your seat belts fastened while the captain taxis what’s left of our airplane to the gate!”

If you’re digging this, I hope it’ll inspire you to take off your girdle and show a little leg.

The right people will love it. (Hint: Those are the ones you want to do business with.)

Because if you don’t have a personality, what do you have?

So what are YOU bringing to the table?

Currently on the word shitlist: Ninja