Ever been to Buenos Aires?

Well me fucking either.

Which is precisely why I just booked a plane ticket.

Who lives in Santiago, Chile and never goes to Buenos Aires? Morons, that’s who. Determined to not be a moron (unless we’re talking about in the kitchen; in the kitchen I’m always a moron), I’m gonna shim-shim-shimmy on over there and see how many tango couples I can trip.

Thought you were real fancy with all that leg kicking, didn’t you? Not so fast, daddy long legs.

I’m assuming that one of two things will happen when a girl from Scranton, Pennsylvania nonchalantly wanders into a meat-loving, Spanish-speaking city with a population larger than New York:

One’s got to think positive.

So in my quest for the perfect hotel–you know, to nuzzle what could inevitably turn out to be the obvious start to THE REST OF MY LIFE, pending future husband’s arrival–I began by doing what any savvy traveler would do.

Now, you can’t judge me for this, because obviously that was a brilliant idea. Who wants Freddy Kruger bringing up the room service? Freddy Kruger is not a part of my Buenos Aires fantasy. Clearly everyone in Argentina is beautiful, and if they’re not, I’d still like to imagine them to be.

Again, one’s got to think positive.

Upon visiting the first link, however, I was immediately proven right. And this petrified me. Where do these people come from? Who’s making these people?

I mean, what if all of the people in Argentina actually ARE beautiful?

What if me and my blotchy red skin around my nose ARE the Freddy Kruger?

What if I’LL GROW OLD AND NEVER, EVER MARRY BECAUSE NO ONE IN ALL OF ARGENTINA FINDS ME ATTRACTIVE ENOUGH, AND I’LL BE SCARRED FOR LIFE?

…Then I calmed down.

At the very least, my life is better.

I RUN A BUSINESS CALLED THE MIDDLE FINGER PROJECT, FOR CHRIST’S SAKE. I WIN.

And I just wasn’t feelin’ any of ’em.

There was lots of historic mansions, rose-color dining chairs, golden candlesticks and flowery wallpaper. You can’t have hot Argentine sex in that.

Then there were the boutique hotels with all of, say, 4 rooms. Boutique hotels weren’t a part of my fantasy; I wanted glitz. I wanted over-the-top. I wanted modern. I wanted flirty little bellhops who wink at you. Mini bars. Beds so sexy I barely want to sleep in them. And r-r-r-room service, of course. (We’ve been over this.)

I basically wanted to feel like Darryl Hannah in Splash when she just arrives in New York for the first time after crawling out from the ocean.

One or the other. (Though if I were James Bond’s secret lover, I’d probably have a pistol in my garter belt, but since they won’t let me into the country with my trusty pistol, this plan is foiled.) (Which is what I’d say if I really did have a pistol.) (Or a garter belt.)

So I looked some more.

And then one day…I found it.

I would reveal the name, but I’m pretty much banking on the fact that at least one of you is a serial killer. And that’s definitely not a part of my Buenos Aires fantasy.

That said, I will just show you some annoyingly braggish photos. And then I will tell you something important about marketing. You didn’t think this was all about me, did you? 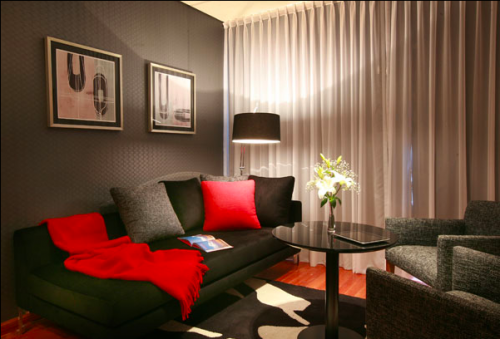 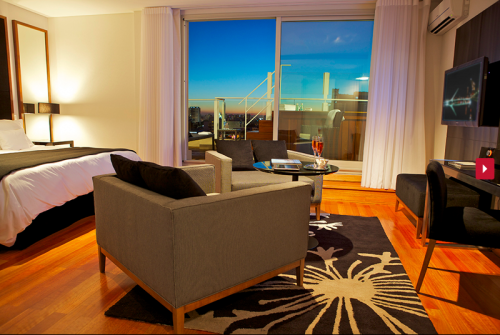 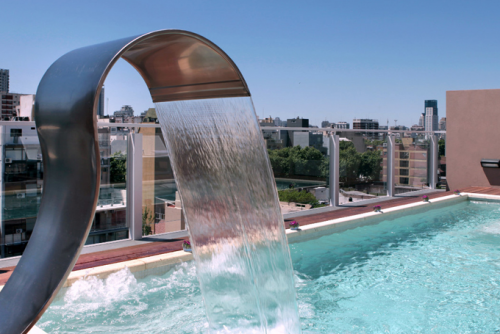 As soon as I found this hotel, I knew it was the one.

First of all, that red and white decor just LOOKS like TMFproject, doesn’t it? I was instantly attracted to its aesthetics.

But moreover, what really sold me was the fact that these guys not only have a rockin’ blog on visiting Buenos Aires, they’re also on Twitter. And they immediately tweeted me to ask how they could help make my stay AMAZING.

Amazing was the word they actually used. Not fucking pleasant. I don’t want a pleasant stay. I want a god damn AMAZING ONE.

So not only do they have awesome aesthetics, but they’re speakin’ my social media language, too. They’re one of me! I’m one of them! We’re all one big family! I’ll fit right in!

And all of it combined sealed the deal for me. At that point, I didn’t care about budgets anymore–I was staying in that hotel.

It’s not because it’s fancy.

Or because they have that mouth-gapingly modern structure coming out of the pool.

Or because it’s situated right next door to television studios and Argentine actors. (Though this really is a huge plus.)

Or even because they tweeted me.

…because staying in this hotel makes me feel MORE LIKE THE PERSON I ASPIRE TO BE.

Which highlights an interesting lesson.

In your marketing, don’t just appeal to the person your target market is.

In your marketing, APPEAL TO THE PERSON YOUR TARGET MARKET WANTS TO BE.

So staying at this hotel isn’t so much a statement about WHO I AM, but rather, WHO I WANT TO BECOME.

And to become that person, I won’t just listen to your marketing. I’ll eat it up.

And I’ll love you from the moment our eyes meet.

Because you’re helping me become the best version of me.

And to me that’s not just marketing.

It’s what good businesses were put on this earth to DO.

Don’t just know who the people are in your target market today.

Predict who they want to become tomorrow.

Get in the head of their future.

And then when you’ve got their attention, turn to them and whisper softly in their ear, letting them know that you’re there anytime they’re ready to walk into it.

One tango step at a time.

Currently on the word shitlist: Nourish your soul