First of all, can we talk about the fact that this photo exists? 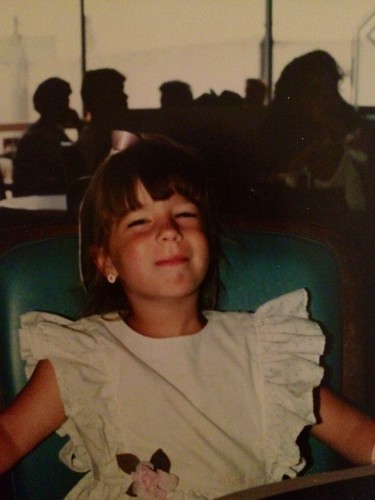 Look at that smugness, like I’m runnin’ the whole damn airport.

Pilots, report to me! Yes, yes. Precisely what I’d say.

Ridiculous stuff like this is probably what inspired my mom to write me a card once, when I was in middle school, that said:

Mommy and Ashie sittin’ in a tree
Ashie said, “Mommy, what will I be?”
Mommy said, “Ashie, you’ll be a real winner…
…A big shot CEO, never cooking dinner.”

Which, of course, was dead on, considering what I bought from Wegman’s the other day: Ready-to-eat grilled chicken fillets, ready-to-eat pulled pork and a pile of Lean Cuisines.

The CEO thing – well, we’re still working on that. 😉  But, as it seems, Andy McKelvey, founder of Monster.com, saw some sparkle of CEO in me, too, when he once served as my mentor and  gave me a full scholarship to college back in the day–including a semester abroad and a new laptop–based on demonstrated “entrepreneurial spirit.”

Because, you know, it’s holy-mother-of-pearl important to have people who believe in you. People who tell you you can do it. People who have an unwavering blind faith in your abilities–even when you don’t.

(I promise I’m not going to get too self-helpey on you. But bear with me here.)

And that’s what I want to do for you, too.

And every single, “Yeah, baby!” (I know I write that shit a lot. You know it. I know it. But you do stupid shit, too, like creep on TMF for years and never introduce yourself in the comments section *sticks out tongue in jest*….so let’s just call a truce, alright?)

The point is this: There is, at the very least, one crazy bitch with this one crazy blog who believes in your ass–and not just that, but she’ll kick it for you, too, with a steel-toed purple suede platform shoe. (Before kicking them off and running away with Johnny Depp, of course.)

God I love when I accidentally rhyme. Back there with the whole “too, shoe” thing. You saw that, right?

Feel free to visit www.StabMeShe’sBabbling.com at any moment in time.

Just kidding. Or am I?

Andy doled out some good advice.

He was quoted on some obscure website on the internet as once saying this:

“There’s no such thing as ‘succeeded,’ in the past tense. We can be ‘succeeding,’ in the process of success, but we will never reach a place where we have ‘succeeded,’ because the minute you behave as if you’ve achieved success, that’s the end.”–

I’m going to believe he said that, because it sounds like something Andy would say.

And you know what?

That smart bastard was right.

2012 is a new year. You know, in case you missed that whole changing of the years thing.

Last year, I pledged a profanity-laden vow to hit $97K with TMFproject–and killed it. It took a lot of hard work, but that’s what you do when you want something.

This year is all about playing even bigger, though.

It’s about continuing to succeed, in the present tense.

Lacing up my most rugged pair of snow boots and bulldozing whatever gets in my way with my humongous man feet.

Today, I finished and submitted a pitch for a TV show, spent 30 minutes pitching a CEO of a big ass company to let me white label their software and run with a new large-scale project I’m proposing, consulted with the leading competitor of those buffoons who pulled the Butterfinger prank in Boston, brainstormed new website ideas to keep you guys having fun, checked in with past One Night Stand clients, and now, of course, here I am at 1:30am writing this blog post.

There’s gonna be some hustle goin’ on, and it ain’t gonna be pretty. It’s going to be sweaty, as a matter of fact.

Running TMF, possibly launching a new company, playing in the non-profit sector, developing a TV show and possibly writing that damn memoir I keep promising myself I’m going to write. And shit, I even have a date this weekend.

But I want you to know I really meant what I said about the whole believing in you thing.

I don’t believe that anyone can do anything–personally, I think that’s a load of crap, because some of us are stronger in some areas than others.

But I’m pretty sure that what you can do? Is be the best version of you.

No one cares what he’d do when it comes to business.

What would the best version of you do, instead?

Wegman’s ready-to-eat food, at that.

Ashie + the TMF crew, sittin’ in a tree
The TMF crew said, “Ashie, what will we be?”
Ashie said, “TMF crew, you’ll be real cool…
because at the end of the day, it’s about being the best version of you…“

Currently on the word shitlist: Ninja