Warning: count(): Parameter must be an array or an object that implements Countable in /home/wtwy2o8vn3c1/domains/accounts.themiddlefingerproject.org/html/wp-includes/media.php on line 1204

I can vividly recall the first time I wrote a resume.

I typed away on our clunky, jumbo HP desktop, silently muttering words that shouldn’t appear in any resume each time autoformat would sneakily attempt to take over my painstakingly-created bulleted list of achievements.

To this day, autoformat and I remain sworn enemies–and with reason, might I add, since I always felt that autoformat was the electronic version of those pushy people who insist on offering unwelcome, unsolicited advice. I never cared much for those jerks, either.

I sat there staring at the blinking cursor, trying to summon my mightiest qualities and craft them into professional-speak jargon that would be meaningful to potential employers:

Will work my ass off if you just give me this one chance, because I have no idea
how I’ll pay off my credit cards if you don’t —–> committed & dedicated to the profession

Promise not to steal your money, your job, your husband or those stupid little
chalk-like pastel-colored mint candies everyone puts in a bowl on their desk —–> trustworthy

Will hear what you’re saying to me while simultaneously texting my friend
about happy hour, updating my Facebook status, checking my work voicemail
and sipping on my Dunkin Donuts coffee —-> talented multi-tasker

Guaranteed to complete a task in half the time because I’ll likely go against
company protocol and work smarter, not harder, without you knowing —-> takes direction well

Will refrain from using phrases like “yo,” “I’m down,” “ain’t no thang,” & “whazzzup!” —–> excellent communication skills

And voila–just like that, I had myself a professional resume, full of BS buzzwords that have become the standard.  Do a Google search for resumes, and see how many of these you see come up over and over and over again.  It’s almost comical, because it’s no secret that not every candidate holds all of those qualities, nor does every job require all of those qualities, but such buzzwords have become as expected as the resume format itself.

Interestingly enough, many of these buzzword qualities point to the ability to essentially be a cog in a wheel.  Takes direction well. Works well in team environment. Multi-tasker. Committed. Essentially this means you’re efficient, you’ll do as you’re told, you won’t cause too many problems, and you’ll do it for a really long time.

And in the past, this was precisely the type of worker that was needed:  One who kept his head down, took orders from above and performed the necessary functions in order to keep the company running smoothly.

So over time, this is the type of worker that has become valued–whether or not, in present-day, it makes sense to value these qualities.

Yet, the one quality that has become so incredibly necessary, as we move into a technological age, is the one that is most overlooked by traditional companies.

Sure, many times it’s like a bonus quality we might add onto our resume–creative thinker–and hope it scores us extra points, but it’s never the skill that’s highlighted, nor praised. (With the exception of creative fields, of course, but that’s an exception.)

Yet, as we keep moving forward, we’re bound to start seeing creativity take the lead as one of the most important skill sets out there.

Because creativity fuels ideas.   And in an internet-age, ideas are what’s fueling the world.

In the past, there was a much greater distance between those with power and those without.

However, with the advancement of technology, this is all starting to change. And it’s changing drastically.

Technology has afforded us many luxuries, but perhaps one of the greatest is a more equal distribution of power–without having to get anyone’s permission.

Now, with the use of the internet, we can create our own power.  We can be our own boss.  We can BE THE GUY AT THE TOP.  We can LEVEL THE PLAYING FIELD.

In order to take advantage of the opportunities that the internet allows, creativity is necessary to spark ideas.  Essentially, the internet has given us a platform to be our own boss, and create a business out of whatever it is that our hearts desire–as long as we’re creative enough to imagine how we can find the intersection between our passions and what it is that others need. It’s a basic matter of supply and demand, tweaked to reflect modern day capabilities.

We no longer have to wait for anyone to give us a promotion in order to start doing the things that we want; the only person we have to get permission from is ourselves–often the hardest part.  It’s not a matter of whether we can or not; it’s a matter of whether or not we have the guts.

That’s where the rubber meets the road. 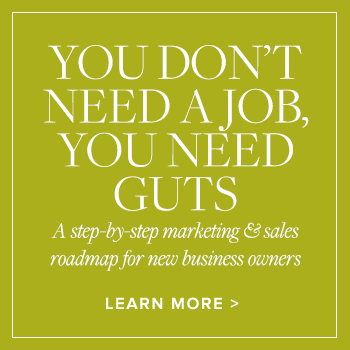