I can’t do serious.

I’m not sure if you could tell from the name of this blog, or from anything I’ve ever written, said, tweeted and/or mimed while naked, but it’s true. (There was actually no naked miming. I do a lot of stuff naked, but really, who the hell mimes these days?)

I’m pretty sure this stems from a long-standing vendetta against elementary school library class. Hey, I have a good idea. Let’s put a bunch of 8 year-olds into a smelly, quiet room where nobody smiles because libraries are very serious ordeals™, and we’ll see how much they like books afterward!

Good thing for recess, or I probably would have turned into a socially awkward fucktard. I might have even started a blog called The Middle Finger Project. Can you imagine?

But really, I think we ought to sit down with these serious folks and have a little chat.

Do you actually have a wedgie, or does it just appear that way?
On a scale of 1 to 4,892, how suicidal do you become when people write “LOL?”
Since fun is out of the question, how do you celebrate birthdays?
Would you just rather die now and get it over with?
What do you hate more: Optimism or Hope?
What do you do if you accidentally get giggly?

No, really. WHAT HAPPENS IF YOU ACCIDENTALLY GET GIGGLY?

You’ll forever be labeled as someone who might actually enjoy life.

I can’t take serious people seriously, because I assume something’s wrong with them.

What the hell happened to you?

Unless you watched a member of the Taliban decapitate your mother, that stern look of yours need to simmer down.

Speaking of the Taliban (like usual), my friend Josh just tweeted me this sweet little gem:

Unless your career goals include “suicide bomber,” it’s time to lighten up.

That asshole actually held the door for you? The nerve!

SMILE at them! See what happens!

However, it isn’t just people who need to lighten up; it’s companies, too.

Too often, you see companies tripping over themselves to “be taken more seriously.”

It translates into unnecessary expenses, bullshit red tape, lots of feather fluffing and a big ol’ facade that does nothing but creates the one thing you didn’t want it to: A divide between you and your customers.

People don’t want serious. Professional, yes, but serious? Not so much.

They want down to earth.

And believe it or not, sometimes the best way to do that is through a sense of humor.

Not only will you surprise and delight your customer–you’ll help them remember you, too.

Take this package wrapper from inside an Altoid’s tin I bought in Argentina last weekend: 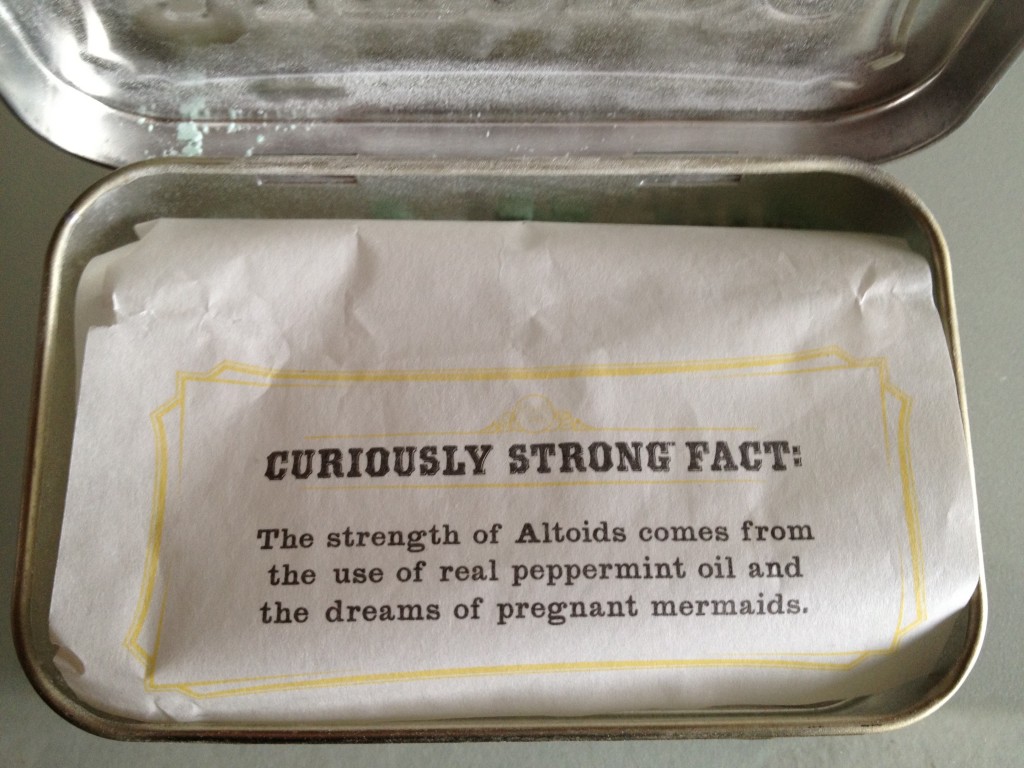 Surely, there are many people who will never buy Altoids again because of this.

But on the other hand, there are many people who will ONLY buy Altoids again because of this.

And that’s what it’s all about, isn’t it?

Have some fun. Lighten up. Don’t just do something. Be something.

And let the serious folks go be seriously broke.

While you go seriously big time.

Accidental giggles and all.

Currently on the word shitlist: Amazeballs