So this past week, I took a motherfucking vacation.

And do you know what?

I’m going to take vacations all the time! It’s been decided! Vacations are just way too great to not take! Why aren’t people vacationing all the time? I hereby declare every last week of the month vacation week. Not only do you get to drink (obnoxious amounts of ) fruity umbrella drinks without an ounce of guilt, you also get to do cool things like burn the shit out of your pasty ass skin ON PURPOSE, and haphazardly throw yourself off of a cliff high above the tree tops in the jungle while relying on some little fucking pulley to KEEP YOU FROM PLUNGING INSTANTLY TO YOUR DEATH.

Can you imagine the field day the iguanas would have with your body? 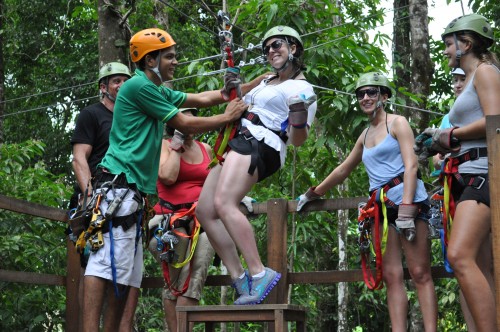 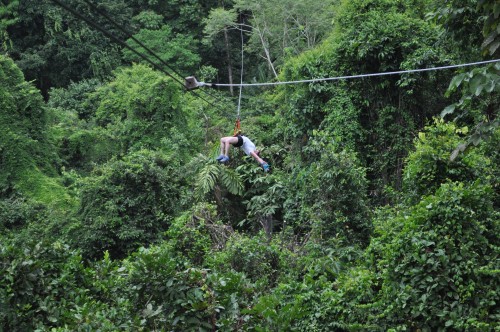 I know that I’m living here, technically, just as I lived in Chile and Spain this past year, and while it may look like I’ve been on constant vacation for years, I haven’t been–I don’t think I’ve shut my laptop for an entire week since the days when AOL was macking the whole dial up scene, and people actually drank bubble tea.

So I’m pretty sure that the point of this blog post is to tell you to go take a damn vacation already, because it was OH so good for mental clarity and regained focus. But obviously it wouldn’t be as much fun if I just came out and said that, so instead, I’m going to rub my vacation in your face so hopefully, by the end of this post, you’re gritting your teeth and hoping I get kidnapped by Colombian guerrilla warriors (who would totally be good-looking) who would slowly torture me day in and day out for months on end using unsanitary sheep shaving tools and/or cages full of mosquitoes.

Here is an obnoxiously boastful list of the things I did last week (that I hope you hate me for, as to light even more of a fire under your ass):

That’s only a partial list, but you get the idea. Holy mother of fun.

Though, I’m pretty sure that even if you don’t happen to have Costa Rica in your backyard, just closing your laptop for a few days and remembering that YOU’RE WORTH IT would do the trick.

You’re worth taking the extra time.

You’re worth the luxury of sleeping in when you need to.

You’re worth cutting yourself some slack.

You’re worth doing things the way you FEEL LIKE DOING THEM.

You’re worth a break.

You’re worth the opportunity to get outside and breath fresh air.

You’re worth that 3rd cup of coffee.

You’re worth the extra long shower.

You’re worth the more expensive version.

You’re worth the nice bottle of wine.

You’re worth taking the time to HAVE FUN.

You’re worth allowing yourself to be ridiculous, and create a Ramon photo collection.

You’re worth feeling what you want to feel.

You’re worth doing what you want to do.

You’re worth your wildest dreams.

And you’re worth carving out the time to nourish them.

So instead of hiking up your bootstraps, how about ripping ’em off for once, and taking a damn vacation, already?

Everything will get done.

Everything always gets done.

And no, pervert, not that way.

Unless that’s really the truth, in which case, you should probably work on that, too.

The Middle Finger Project. Not Your Grandmother’s Blog.

Currently on the word shitlist: Authentic